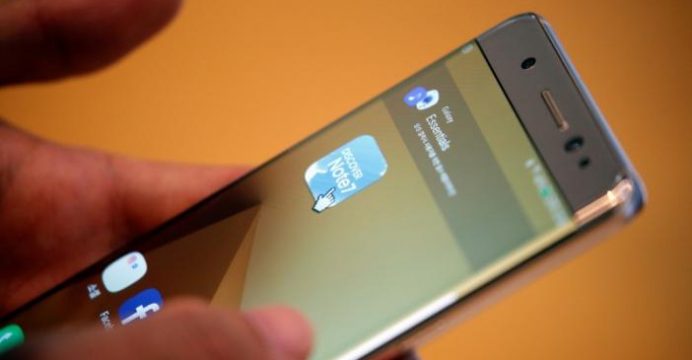 Samsung Electronics Co Ltd scrapped its flagship Galaxy Note 7 smartphone on Tuesday less than two months after its launch, dealing a huge blow to its reputation and outlook after failing to resolve safety concerns.

Samsung announced the recall of 2.5 million Note 7s in early September following numerous reports of the phones catching fire and on Tuesday it finally pulled the plug on the $882 device in what could be one of the costliest product safety failures in tech history, reports Reuters.

The decision to scrap the Note 7 came after fresh reports of fires in replacement devices prompted new warnings from regulators, phone carriers and airlines. 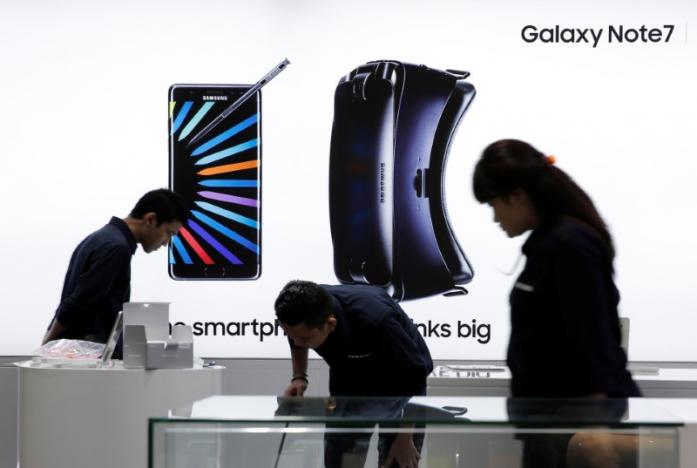 Sales promotion staff stand in front of a Galaxy Note 7 advertisement at a Samsung store in Jakarta, Indonesia

“(We) have decided to halt production and sales of the Galaxy Note 7 in order to consider our consumers’ safety first and foremost,” the South Korean firm said in a filing to the Seoul stock exchange.

Samsung said earlier it asked all global carriers to stop sales of the Note 7s and the exchange of original devices for replacements, while it worked with regulators to investigate the problem. The company is offering to exchange Note 7s for other products or refund them.

Samsung’s decision to pull Note 7s off the shelves not only raises fresh doubts about the firm’s quality control but could result in huge financial and reputational costs.

Analysts say a permanent end to Note 7 sales could cost Samsung up to $17 billion and tarnish its other phone products in the minds of consumers and carriers.

Investors wiped nearly $20 billion off Samsung Electronics’ market value on Tuesday as its shares closed down 8 percent, their biggest daily percentage decline since 2008.

“This is the first time that I have seen a product recall go this badly wrong,” financial analyst Richard Windsor said in a note to clients. “When it comes to the damage that it will do to Samsung’s brand, we are in uncharted territory”.

The premium device, launched in August, was supposed to compete with Apple Inc’s latest iPhone for supremacy in the smartphone market. Well received by critics, its first problem was a shortage as pre-orders overwhelmed supply.

But within days of the launch images of charred Note 7s began appearing on social media, in the first sign that something was seriously amiss with the gadget.

The South Korean company was counting on the Note 7 to replace its previous flagship model, the Note 5, which had sold around 15 million units over the four quarters ended in June, according to Strategy Analytics data.

Instead, Samsung will be forced to count on existing models such as its Galaxy S7 edge, which has a slightly smaller screen but is also slightly less expensive.

The void left by the demise of Samsung’s flagship phone leaves the door open to rivals like Apple, which last month introduced its latest iPhone 7 line and Google, which is set to launch its new Pixel phone later this month.

However, the most likely beneficiaries are other high-volume Asia-based makers of premium-priced phones based on Google’s Android operating system, Mawston said.

“The gap is likely to be filled by rivals including Apple and Google Pixel, although probably Oppo, Vivo, LG Electronics and Sony stand to benefit the most,” Mawston said.

The South Korean firm did not comment on whether it had identified the cause of the fires in the replacement devices, although officials in Seoul said it was looking at several possibilities including the batteries.

“It is more difficult to analyze the cause of the accidents this time because of various patterns of the accidents,” an official with the Korean Agency for Technology and Standards, which met with Samsung and experts on Monday, told Reuters.

China’s quality watchdog said Samsung would recall all 190,984 Note 7s sold in the mainland. The U.S. Consumer Product Safety Commission said Samsung was making the right decision by halting sales and exchanges of the device.

“No one should have to be concerned their phone will endanger them, their family or their property,” CPSC Chairman Elliott Kaye said in a statement.

The U.S. Federal Aviation Administration and South Korea’s transport ministry added their voices to concerns from the aviation industry, saying no Note 7s should be used or charged inside airplanes.

Verizon Communications Inc, the largest U.S. wireless carrier, said it may shift marketing away from the Note 7 heading into the critical holiday selling season.

“We have the new iPhone, we’re about to launch the new Google Pixel, which is exclusive to us. We’ve got great phones from Motorola as well,” Verizon spokeswoman Kelly Crummey said.

“I think you’ll see our marketing focused on those devices because there is certainty on those at this time.”