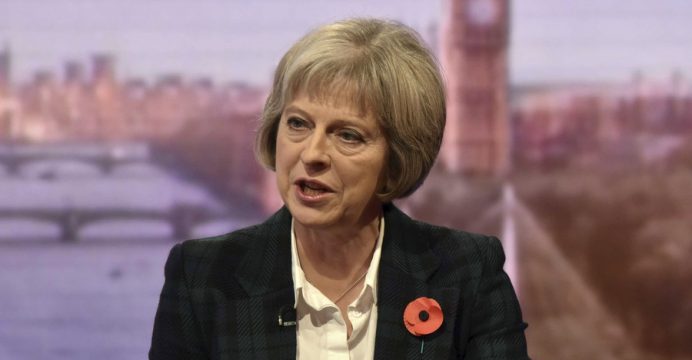 Theresa May unveiled new vision for the ruling Conservatives

British Prime Minister Theresa May unveiled on Wednesday what she called a new “vision” for the ruling Conservatives – to serve the country by spreading wealth more evenly and becoming the party for “ordinary working-class people”.

May, speaking on the final day of the Conservative Party’s annual conference, told members the government must tackle the problems that spurred millions of Britons to vote to leave the European Union at a referendum on June 23 – a decision she said was part of a protest against the “rich and powerful”.

She said she wanted a Brexit deal that offered “maximum freedom” to operate in Europe’s single market, but also emphasized that she wanted control over immigration, reports Aljazeera.

May was appointed prime minister after her predecessor, David Cameron, stepped down over Brexit

Attacking business leaders who abused the system to accrue wealth unfairly and the accountants who help them, she also said she would make sure that everyone “plays by the same rules”.

She described Britons’ decisions to leave the EU as a “quiet revolution” that saw the country take “control of our own destiny”.

Phillips said the speech reflected May’s analysis of what happened at the Brexit referendum on June 23 when more than 17 million people expressed “a great cry of anguish, anger, and frustration.

“They weren’t simply saying take us out of the EU. They were also saying capitalism – globalization if you have to call it that – isn’t working for us. She’s trying to make the Conservative Party more than just the party of the privileged few.”

On Sunday, May said she will trigger Article 50 of the Lisbon Treaty before the end of March 2017, a two-year process that will divorce the UK from the European Union.

Britain’s allies fear its exit from the EU could mark a turning point in post-Cold War international affairs that will weaken the West in relation to China and Russia, undermine efforts towards European integration, and hurt global free trade.