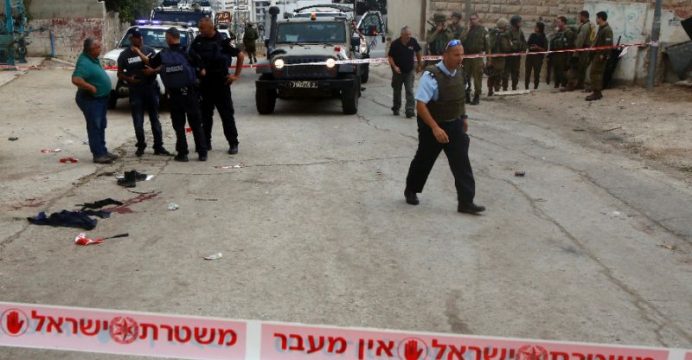 An assailant believed to be Palestinian stabbed and wounded an Israeli officer in a West Bank settlement on early Sunday before being shot by forces at the scene, the army said.

“A terrorist carried out a stabbing attack in Efrat and wounded an officer,” the army’s Twitter account said.

Both were evacuated to the Hadassah hospital in Jerusalem, which said the perpetrator was in moderate condition after suffering a gunshot to his head, while the soldier had been stabbed in his armpit, reports BSS.

It was the fifth attack on Israeli security forces or civilians since Friday after a three-week lull in a nearly year-long wave of violence.

Efrat is a short distance from the flashpoint West Bank city of Hebron, where on Saturday a Palestinian stabbed a soldier before being shot dead.

On Friday, two Palestinians rammed a car into a bus stop used by Israelis near the adjacent Kiryat Arba settlement, causing injuries before troops killed one of the assailants.

The same day, a Jordanian stabbed a police officer in Israeli-annexed east Jerusalem before being shot dead. The Israeli army announced on Saturday it was deploying an additional battalion to reinforce the Hebron area following the uptick in violence around the city.

The wave of violence since last October has killed 227 Palestinians, 34 Israelis, two Americans, one Jordanian, one Eritrean and a Sudanese, according to an AFP count.

Israeli forces say most of the Palestinians killed were carrying out knife, gun or car-ramming attacks. Others were shot dead during protests or killed in Israeli air strikes on Gaza. Israel has occupied the West Bank since capturing it in the Six-Day War of 1967.