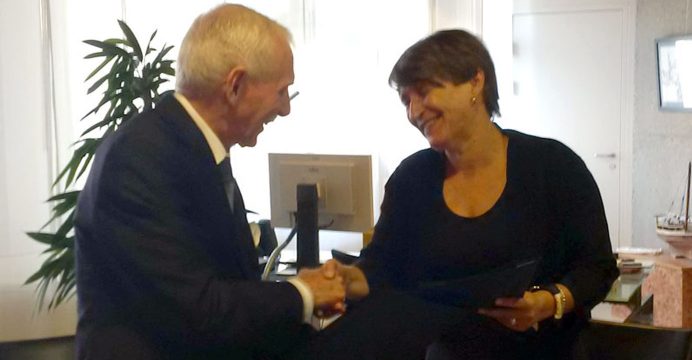 IOM and Netherlands strengthen there cooperation

IOM and the Government of the Netherlands have agreed on closer bilateral cooperation in the field of migration through a Memorandum of Understanding that was signed by Foreign Trade and Development Cooperation Minister Lilianne Ploumen and IOM Director General William Lacy Swing.

The Memorandum consolidates the strategic relationship between IOM and the Netherlands and defines priorities for future cooperation towards a more comprehensive and long-term approach to migration governance.

“There are currently about 65 million people around the world who have been displaced or forced to flee their homes, the highest number at any time since the Second World War. IOM is an important global organization to address the challenges of forced migration. As a strategic partner, IOM’s contribution to the reception and protection of migrants and refugees along the main migration routes in Northern Africa, the Middle East, the Balkans and Europe is very important,” said minister Ploumen.

IOM around the world is engaged in the migration issues which are considered priorities by the Dutch Ministry of Foreign Affairs: cooperation with authorities and host communities in the reception of refugees; engaging diaspora in the development of their home countries; and promoting voluntary return and reintegration.

Director General Swing’s visit takes place days before the UN Summit for Refugees and Migrants on 19 September when IOM will officially become a Related Organization of the United Nations.

IOM was founded 65 years ago and has been a reliable partner of United Nations agencies without formally being a UN organization.

This is the first time the UN General Assembly has called for a summit on migration at the Heads of State and Government level and it is a historic opportunity to develop a blueprint for better international response. It is a watershed moment to strengthen governance of international migration and a unique opportunity for creating a more responsible and predictable system for responding to the large movements of refugees and migrants.