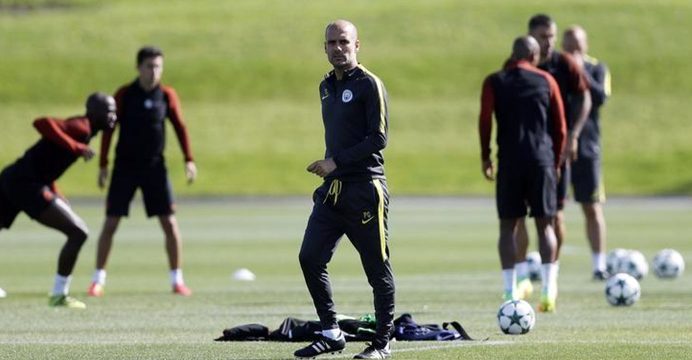 Pep Guardiola says Manchester City are not yet ready to compete with Europe’s elite but his side will be confident of opening their Champions League campaign with victory over Borussia Moenchengladbach on Tuesday.

But Guardiola, twice a Champions League winner as coach of Barcelona, has quickly moved to dampen expectations.

“Until now, in the Premier League it has been okay — but to compete against the best clubs in Europe, in this moment with the way we are playing, we are not able to,” Guardiola said.

The comment was all the more surprising as it came after Saturday’s impressive 2-1 victory at Jose Mourinho’s Manchester United.

Even without top striker Sergio Aguero, who was suspended but will be available on Tuesday, City oozed confidence.

The same cannot be said of Moenchengladbach, who City beat twice in the group phase last season before going on to reach the semi-finals for the first time.

The Bundesliga side were beaten 3-1 at SC Freiburg over the weekend, interrupting what had been a bright start to the season for Andre Schubert’s men.

Fourth in the Bundesliga last season, Moenchengladbach had crushed BSC Young Boys 9-2 on aggregate in the Champions League play-offs and opened their domestic campaign with a 2-1 victory over Bayer Leverkusen.

Brazilian midfielder Raffael, however, said Saturday’s defeat would not impact on their trip to the Etihad.

“I’m not anxious about the meeting with Man City, as it will be a completely different game. We aren’t afraid of any team,” he told the club’s website.

City represent a huge challenge though, especially given Guardiola’s pedigree in the competition.

He has never failed to reach at least the semi-finals in seven previous seasons coaching in the competition and, whatever he says about City’s readiness, he will surely be disappointed if his new club are not still alive in May.

Saturday’s win at Old Trafford meant Guardiola became the first City manager to win his first six games in charge and there are positive signs that his tried and tested methods are already being taken on board by his squad.