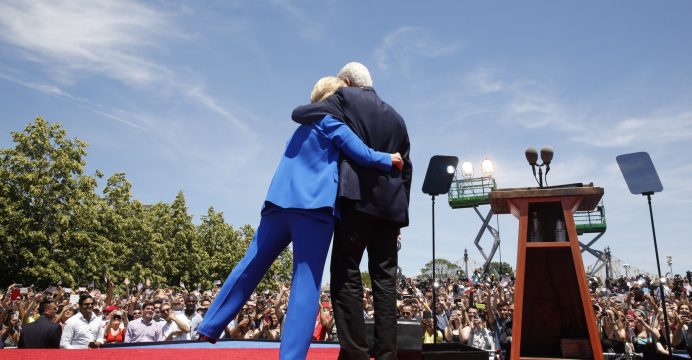 The largest program of the Clinton Foundation, the family philanthropy of U.S. Democratic presidential candidate Hillary Clinton, is still weighing whether to continue accepting foreign donations should Clinton be elected, a spokeswoman said on Friday.

It was reported on Thursday that the Clinton Foundation would no longer receive donations from foreigners or corporations if Clinton wins the election in November, an effort to defuse criticism that donors to the globe-straddling charity might inappropriately seek White House favors in return, reports Reuters.

But representatives of the charities confirmed on Friday that the new guidelines would only apply to a small portion of the foundation’s activities, including its work on climate change and some of its work on economic development.

The Clinton Health Access Initiative (CHAI), the foundation’s flagship project credited with reducing the cost of life-saving HIV medicines in the developing world, is yet to decide if it will similarly introduce new limits on donors.

“CHAI is a separate legal entity from the Clinton Foundation with its own Board,” Regan Lachapelle, a CHAI spokeswoman, said in an email. “The CHAI Board will be meeting soon to determine its next steps.”

Similarly, a Canadian offshoot of the foundation, the Clinton Giustra Enterprise Partnership (Canada), or CGEP, will not be bound by the foundation’s donor limits, but said it will instead become an “independent entity” if Hillary Clinton becomes president.

CGEP, which says Canadian law prevents it from disclosing its donors’ names without their permission, was founded by Bill Clinton, the former U.S. president, and Canadian businessman Frank Giustra in 2007 to improve work opportunities for people in poor countries.

“If Secretary Clinton wins the election, we plan to spin CGEP into an independent entity to continue this important work,” Giustra said in a statement. “President Clinton and I believe it is important that we continue the work of alleviating poverty around the world.” The statement did not specify Bill Clinton’s future role.

A spokesman for Clinton’s campaign declined to answer questions about the foundation. The charities have received praise from public health experts for their work alleviating the spread of HIV, and Clinton’s campaign has said any donor expecting political favors in return would be misguided.

The family renamed their foundation the Bill, Hillary & Chelsea Clinton Foundation in 2013, although Hillary Clinton stepped down from her board position last year after announcing her presidential bid. Her husband and daughter remain board members.

In 2008, Hillary Clinton signed an ethics agreement governing her family’s charities in order to become President Barack Obama’s secretary of state. She promised that her family’s charities would name all their donors on an annual basis and seek clearance from the U.S. State Department before accepting new donations from foreign government money. Last year, the charities said they did not comply with these promises, blaming “oversights.”

On Tuesday, the Boston Globe said in an editorial that the foundation should shut down. “Even if they’ve done nothing illegal, the foundation will always look too much like a conflict of interest for comfort,” the editorial board wrote.