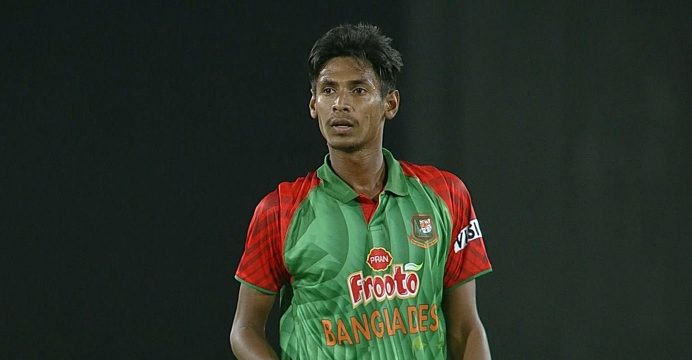 Mustafiz known to international media as Fizz arrived in the in the city in the morning. The pacer had undergone a surgery on his left shoulder in London last week and is expected to take at least four to five months to get back on the field.

Talking to reporters at Hazrat Shahjalal International Airport, Fizz said he was feeling fine and he had already started a few rehabilitation exercises.

Cutter Master Mustafiz in a very relaxed mood said there was no pain in his arm by the grace of Allah and was recovering well and his aim is now to work on his rehab program.

“I intend to begin my rehab within four weeks time and after that I hope to recover quickly and will be able to get back to the field soon. I request my fans to pray for my quick recovery so that I can entertain them back in the field,” Mustafiz said.

Earlier, Satkhira boy went to London to play for Sussex. However, after playing two games, a recurring shoulder problem began to irritate him again. In order to fix the problem once and for all, the

Bangladesh Cricket Board (BCB) decided that the bowler should go for surgery. The surgery was conducted on August 11 at the BUPA Cromwell Hospital in London.

Just prior to the surgery, Prime Minister Sheikh Hasina, an avid sports lover, talked to Mustafiz by phone and hoped for his successful operation and early recovery.

Dr. Debashish informed: “The procedure began around 1600 local time (2200 BST) and took about an hour to finish. The type two SLAP tear of his left shoulder has been repaired. He will have to stay for another 10 days and then start back home. It all depends how he respond to the treatment.”