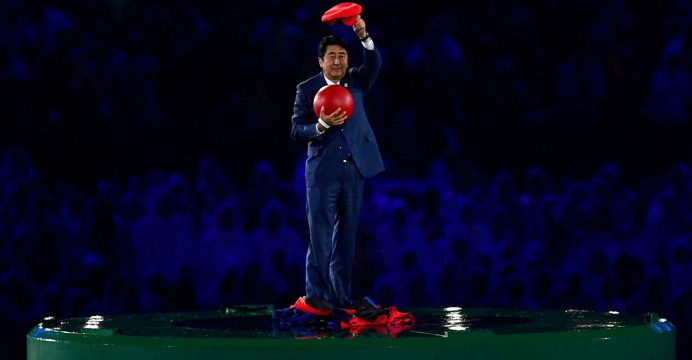 Japan on Monday reacted with a mix of surprise, delight and cynicism at the sight of Prime Minister Shinzo Abe dressed up as video game icon Super Mario in a comical cameo at the close of the Rio Olympics, reports BSS.

Social media immediately lit up as scenes of Abe wearing a Super Mario costume proved jaw-dropping to Japanese watching the spectacle on television half a world away.

“I was impressed to see a national leader sacrificing his reputation and showing up in cosplay at this world event,” posted a Japanese-language Twitter user.

Most had apparently never conceived of the normally blue-suited and politically conservative Abe and the moustachioed Mario merging into one.

“I never thought of having Prime Minister Abe play Mario, let alone him emerging from plumbing,” another Twitter user said.

That was a reference to Abe’s entrance before the vast crowd at Rio’s Maracana stadium where plumber Super Mario came out from underground after drilling down from Tokyo into the earth to reach Brazil.

Some voices, however, were sharply critical.

“He popped up from a pipe grossly contaminated by radiation,” said one tweet, apparently referring to the Fukushima nuclear power plant that was crippled by a massive 2011 tsunami.

Abe came under fire in 2013 after he made a global promise to Olympic chiefs just ahead of a decision to award the Games to Tokyo, saying of the plant: “Let me assure you, the situation is under control.”

The facility is being decommissioned and that is expected to take decades to achieve, while some areas around it remain uninhabitable due to high levels of radiation.

The closing ceremony and transfer of the Olympic flag to Tokyo was the top story in Japan’s evening newspapers, with some including short items on Abe’s transformation into Super Mario.

Tamayo Marukawa, the Japanese minister in charge of the 2020 Tokyo Games, told reporters in Tokyo she was not informed of Abe’s plan to portray the popular Nintendo game character.

“I didn’t know about this at all,” she said. I never imagined he would play Mario.”

She then suggested Abe should start calling himself “Shinzo Mario Abe” to raise his global profile.

“I wanted to show Japan’s soft power to the world with the help of Japanese characters,” he told reporters.

“I wasn’t sure how the audience would react,” he added.

“But I received so many cheers. I appreciate it.”