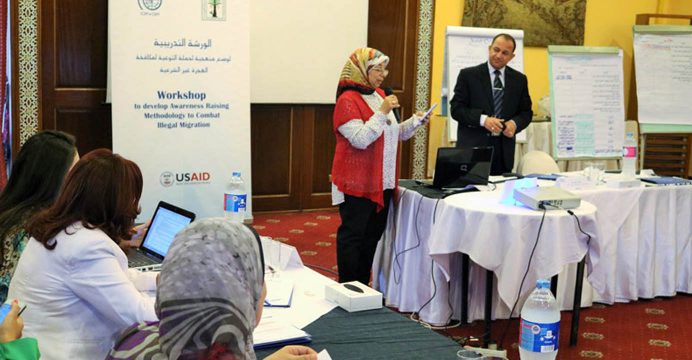 Organizations reach out to discourage irregular migration among young Egyptians

OM and Egypt’s National Council for Childhood and Motherhood (NCCM) have organized a workshop from 23-25 August, for 35 government officials, parliamentarians and community leaders to prepare a program of nationwide outreach activities to discourage young Egyptians from migrating irregularly.

The aim of the workshop was to conceptualize methodologies for targeted and community-based outreach with young people. Participants also devised monitoring tools to measure the impact of awareness-raising activities.

NCCM is mandated to implement awareness-raising activities with youth and children under the auspices of the National Coordinating Committee of Combating and Preventing Irregular Migration (NCCPIM).

NCCPIM developed the national awareness raising campaign with IOM support at a time when irregular migration among young people is at a record high.

Since 2011, Egypt has recorded the highest percentage of unaccompanied migrant children migrating irregularly to Europe. In April and May 2016 alone, a total of 1,113 Egyptian unaccompanied minors arrived in Italy, compared to only 94 during the same period in 2015.