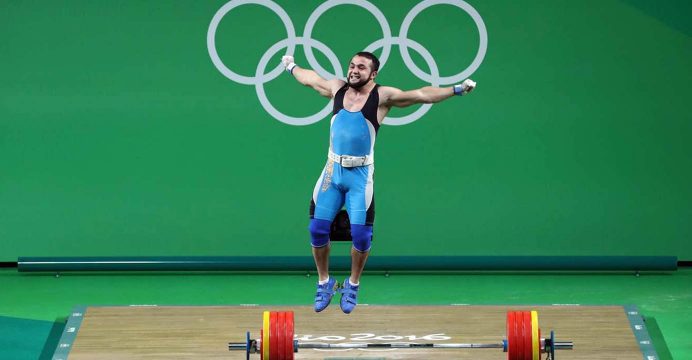 A Kazakh weightlifter who has served a two-year doping ban smashed a world record to stun China’s Lyu Xiaojun and grab Olympic gold at the men’s 77kg weightlifting in Rio Wednesday, reports BSS.

The International Weightlifting Federation (IWF) banned Nijat Rahimov from the sport from June 2013 to June 2015 after testing positive for illegal substances while representing Azerbaijan.

The 22-year-old, who switched to Kazakhstan after returning from his ban, refused to answer repeated questions about doubts surrounding his country’s involvement in weightlifting in the run-up to the Games.

The IWF, which issued blanket bans to Russia and Bulgaria, also had wanted to ban the Kazakhs from lifting at Rio due to a number of high-profile doping cases.

However, the International Olympic Committee was unable to complete re-testing of samples from the Beijing and London Games in time, freeing Kazakhstan to compete.

“I’m not aware of the problem so that’s exactly what I would tell them,” Rahimov said , when asked what he would say to Olympic fans who may have concerns about Kazakhstan’s participation.

China’s Lyu had looked odds-on to win the event after he broke the snatch world record with 177kg and was well ahead of Rahimov going into the second stage.

However, the London 2012 gold medallist failed to lift 202kg on his second attempt.

When he succeeded with his third he clearly thought he’d done enough to win, removing the straps of his leotard to reveal his torso as he clenched his fists and roared in celebration.

Rahimov had other ideas, though, lifting 214 kg to beat a 15-year-old record and register a combined total of 379.

That was the same total as Lyu but Rahimov won by virtue of being lighter. His sensational lift came with an attempt to spare and after Lyu had finished all of his, meaning there was no way back for the 2012 champion.