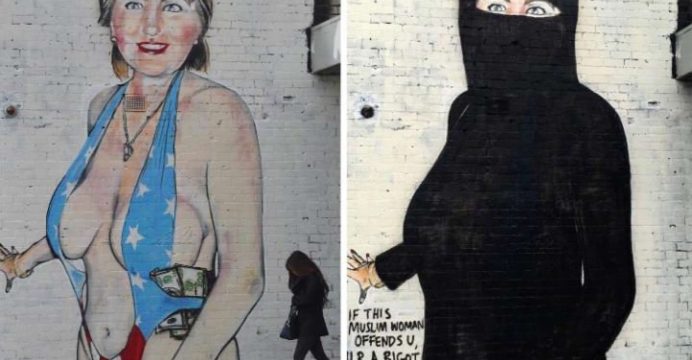 Clinton mural painted over after bikini and niqab fail to fit

A mural in the Australian city of Melbourne of U.S. Democratic presidential candidate Hillary Clinton in a revealing swimsuit, that was later updated to show her in a niqab, has been painted over.

The town council in the city suburb said the original image of Clinton wearing a stars-and-stripes swimsuit stuffed with $100 bills had led to complaints from the community about the depiction of a near-naked woman on the side of a scooter shop, reports Reuters.

Media said the council had told street artist known as Lushsux to remove his mural last week or face a fine, with the building owner also threatened if the image remained.

Lushsux, who previously depicted U.S. Republican presidential candidate Donald Trump in a mural, had by Monday updated the image of Clinton to show her in Islamic dress.

“If this Muslim woman offends u, u r a bigot, racist, sexist Islamophobe,” Lushsux wrote next to the Clinton mural.

On Wednesday, the wall had been painted completely black.