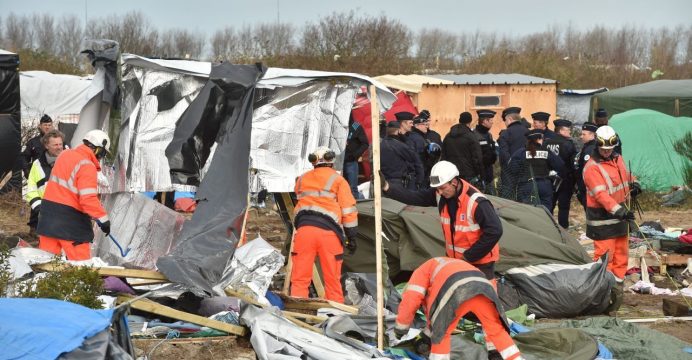 The tents and shelters of Calais’ infamous “jungle” camp have been rebuilt in London in a new installation hoping to teach Britons more about Europe’s migrant crisis.

The “Encampment” exhibit, which runs until Aug. 7, features structures rebuilt with materials used by the residents of the migrant camp in northern France, which have now been temporarily set up outside London’s Somerset House venue, reports Reuters.

Earlier this year, French authorities dismantled the southern half of the camp, where thousands of migrants fleeing war or poverty in the Middle East, Africa and Asia have massed, hoping to make their way to Britain. The installation has been created by the Good Chance Theater group, which set up a temporary theater at the Calais camp for its residents, and A Home For Winter, which builds shelters for the displaced.

Among those on display are structures with graffiti reading “hello UK” or “humans after all”. One bears the writing of Syrian refugee Hamoude Khalil, now in Britain, who wrote “We just want to go in England please”.

“All of my dreams were inside this,” the 24-year old, who fled Aleppo some 11 months ago, told Reuters. “Now all of my dreams are coming with me. This has happened and I made it.”

Good Chance Theater has also transported and set up the dome structure it used for performances at the Calais camp on London’s South Bank. It will host performances as well as discussions around Europe’s refugee crisis.

Last month, Calais’ mayor said authorities would soon announce that the remaining half of the camp would be dismantled.