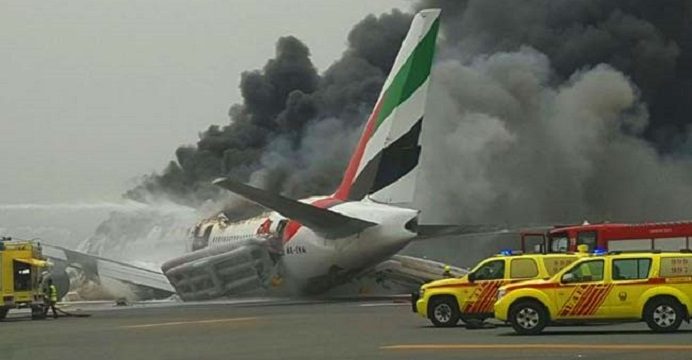 An Emirates plane with 275 people on board was involved in an accident on landing on Wednesday at Dubai airport but all the passengers were evacuated safely, the government said. Footage on social media showed smoke billowing from the aircraft. The cause of the accident was not immediately clear, reports BSS.

“An Emirates plane coming from India has been involved in an accident on landing at Dubai International,” the government’s Dubai Media Office said on its Twitter account.

“All passengers were evacuated safely and no injuries have been reported so far,” it said. 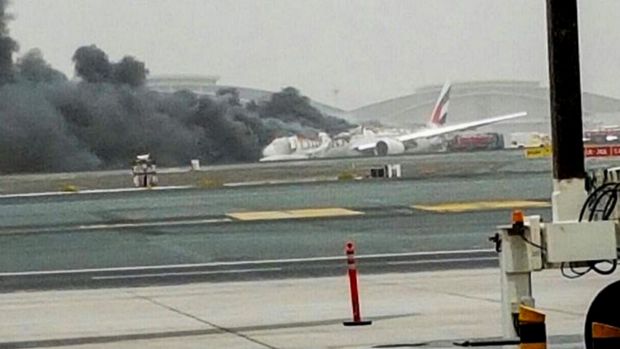 All departures from Dubai International Airport have been halted “until further notice,” it added. Emirates confirmed the incident, saying that the plane was a Boeing 777.

“We can confirm flight EK521 from Thiruvananthapuram to Dubai has been involved in an accident at Dubai International,” the carrier said on its Twitter account.

“There was 275 passengers and crew on board. Our main priority now is the safety and well-being of all involved,” it said.

Emirates said it had “no further information on what may have caused the accident”.

“Our priority remains with the passengers and crew involved,” it said.

Footage on social media showed thick black smoke coming out of the centre of the plane while the fuselage appeared to be lying on the runway with escape slides opened.

The Dubai Media Office said the fire “has been contained,” adding that emergency teams at the airport and Emirates are “well trained to deal with such incidents”.

The accident comes almost four months after a plane belonging to Dubai’s other carrier, flydubai, crashed and burst into flames as it was landing in Rostov-on-Don, in southern Russia, killing all 61 people onboard.

On July 26, an Emirates Boeing 777-300 aircraft heading to the Maldives made an emergency landing in Mumbai because of a “technical fault”.

Dubai International is the world’s largest hub in terms of international passengers and is the base for Emirates, from where it serves more than 153 destinations.

Emirates, Qatar Airways, and Abu Dhabi’s Etihad have seized a significant portion of transcontinental travel, capitalising on the geographic locations of their Gulf hubs.

Emirates is the largest single operator of the Boeing 777, as well as the Airbus A380 superjumbo, and has expanded its fleet to 250 aircraft last year.