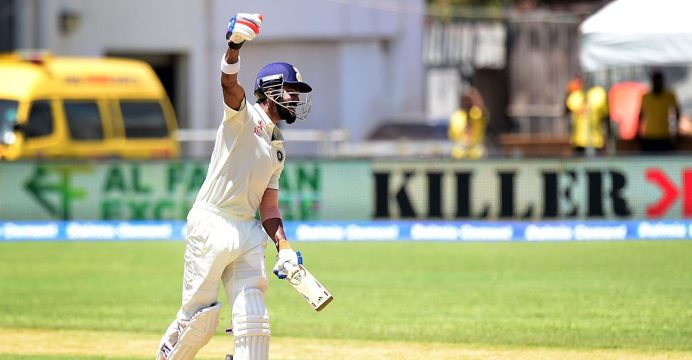 Opening batsman Lokesh Rahul scored a career-high 158 as India consolidated their dominance on day two of the second test against West Indies in Jamaica on Sunday.

India scored slowly, adding only 232 runs off 88 overs, while losing four wickets on a day that will not go down as one of the most compelling in cricket history.

The visitors were 358 for five in their first innings by close of play at Sabina Park in Kingston, a lead of 162 runs with five wickets in hand.

The Windies attack bowled with discipline and while they did not exactly terrorise the batsmen, they at least kept them mostly in check.

Not that India were under any pressure to score quickly. With three days left, they have time on their side and seem determined to grind out a big lead.

Rahul posted his third century after just 11 test innings in his burgeoning career.

He faced 303 balls before being dismissed by fast bowler Shannon Gabriel, caught down the legside by wicketkeeper Shane Dowrich.

“My mindset was to play positively,” Rahul said in an on-field interview.

“The wicket was a little slow when we started but it got better as the day went on but the bowlers kept putting the ball in the right area, so it was hard to get runs today.

“The weather was really, really hot. That was the biggest challenge for me. I was cramping.”

Rahul was the only Indian batsman to get past 50.

Number three Cheteshwar Pujara scored a painstaking 46 off 159 balls before being run out by a sharp piece of fielding from Roston Chase, who scored a direct hit from more than 20 metres.

And captain Virat Kohli, coming off a double century in the first test won by India, accrued 44 before being caught at short-leg off the bowling of off-spinner Chase.

“I got one to get a bit of extra bounce and that was the end of him,” Chase said.

“We didn’t get the wickets as we liked but they didn’t run away with the score (as in) the first match, so that was one positive.”

All-rounder Ravichandran Ashwin, who took five wickets with the ball on Saturday, could not emulate that success with the bat, falling to leg-spinner Devendra Bishoo, lbw for three.