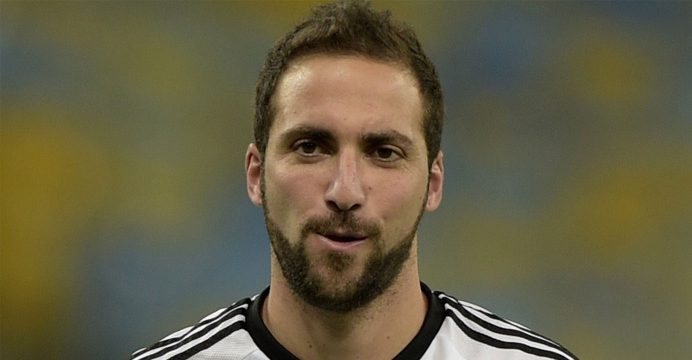 Higuain goes from hero to zero in record Juventus deal

On 36 occasions last season, Argentina striker Gonzalo Higuain boosted Napoli dreams of ending a 26-year title drought as he inspired with goalscoring feats in the Scudetto race with Juventus.

On Tuesday, Higuain went from hero to zero after completing the world’s third most expensive transfer to join Napoli’s rivals in a move that has underlined his quest for succcess, yet prompted swift criticism.

Higuain was feted as the King of Napoli only two months ago when he broke Gunnar Nordahl’s 66-year-old record of 35 goals in a single Serie A season as the Azzurri battled Juve for a title they last won in 1990.

But less than a month before Juve begin their bid for a record sixth consecutive title, the 28-year-old Argentine’s name in Naples might as well be mud.

As Juve fans largely rejoiced when they smashed the Italian transfer record by paying 90m euros ($98.8m, o75.3m) to capture Higuain, their Napoli counterparts reacted by posting photos of their former idol’s shirt in the toilet.

Higuain will undergo a medical on Wednesday ahead of signing a five-year deal that would leave him behind only Gareth Bale and Cristiano Ronaldo in the list of most expensive transfers.

But as Juventus, who have also signed exciting Bosnian midfielder Miralem Pjanic from Roma and central defender Medhi Benatia from Bayern Munich, continue to reinforce Massimiliano Allegri’s squad for a fresh assault on the Champions League, they may also have unleashed the biggest controversy of the summer.

From top footballers to television celebrities and even Napoli’s kit man, Higuain’s move to the most potent, revered and perhaps hated club in Italy was met with mixed reaction.

For one-club man Francesco Totti, who is set to play his final season with Roma, it is a disaster that smacks more of “business than passion”.

“People come to the stadium to have fun and to see a player that’s always with the same team. Maybe they hope for a player that won’t betray them,” he told Gazzetta World.

“But, it’s completely normal now that when a foreigner comes to Italy he has the possibility of going to another team to make more money.

Others, such as Salvatore Esposito — who plays gangster Genny Savastano in the hit Italian TV series ‘Gomorra’ — says Higuain has become “poorer” for trading in the unconditional love of Napoli’s fans for a richer existence in chillier Turin.

“As a people, when we grow to love someone that love is unconditional,” said Esposito, sporting a Napoli top and cap in a video posted on La Gazzetta dello Sport’s website.

“The way Gonzalo left was… pathetic, if you ask me. But in the end, it’s business. I just hope the (club) president uses the money well to invest in a decent replacement.”

For Napoli’s veteran kit man Tommy it was even written in the sky on Tuesday evening when he posted a picture of smoke pouring out of nearby volcano Mount Vesuvius.

“The mountain has seen this coming,” he wrote on Twitter.

But as Totti admits, few players in the modern game remain loyal to clubs for lengthy spells, and Higuain is no exception.

After a breakthrough season with River Plate in Argentina, Higuain spent six and a half years at Real Madrid where he helped the Spanish giants to three La Liga titles and boosted his international status.

But continued disappointment at a lack of first-team starts put Higuain on the market, and he moved in 2013 in a deal worth 40m euros.

Despite three positive seasons that notably saw him thrill fans throughout their last campaign as he chased Nordahl’s landmark, Napoli’s failed bid for the title left Higuain wanting more again.

He leaves Napoli with an Italian Cup winner’s medal from 2014, for a team that are favourites to defend their league and Cup double, and launch a renewed bid for Champions League glory having come close in 2015 with a 3-1 final defeat to Barcelona.