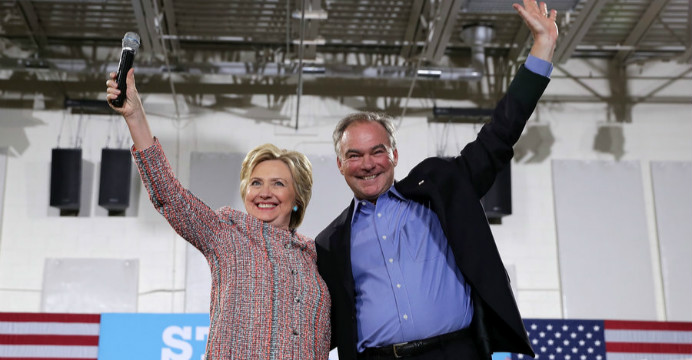 Tim Kaine named as the running mate of Hillary Clinton

Democratic presidential candidate Hillary Clinton has selected Tim Kaine, a centrist senator from Virginia, as her running mate. Mrs Clinton broke the news in a tweet late on Friday. She plans a formal announcement on Saturday, reports BBC.

Mrs Clinton passed over more left-leaning candidates in favour of the 58-year-old senator, who is a strong supporter of free-trade agreements. His home state of Virginia is a major battleground in the coming election.

According to Reuters, The Spanish-speaking former Virginia governor and Richmond mayor fit Clinton’s long-stated criteria that the vice presidential choice be a capable and reliable partner who is ready to take over the presidency if necessary.

Clinton made the announcement v ia Twitter and a text message to supporters after the first day of a two-day campaign swing in Florida. She called Kaine to tell him about 40 minutes before the announcement, and called President Barack Obama shortly after Kaine.

“I’m thrilled to tell you this first: I’ve chosen Sen. Tim Kaine as my running mate. Welcome him to my team,” she said in her text message.

The former secretary of state will be formally nominated as the party’s presidential candidate for the Nov. 8 election at next week’s Democratic convention in Philadelphia. She leads Trump in many opinion polls.

Clinton’s choice of a running mate could give her campaign momentum heading into the convention, as the fight for the White House begins a more than three-month push to the finish.

Clinton, 68, acknowledged in an interview earlier this week that even Kaine admits he is boring, and said she did not mind.

Republican presidential candidate Donald Trump, in a text to his supporters, described President Obama, Mrs Clinton and Mr Kaine as “the ultimate insiders” and appealed to voters to not “let Obama have a third term”.

Republican Party chief Reince Priebus tweeted scornfully: “Hillary Clinton’s choice of Tim Kaine does nothing to unify a fractured Democrat base repelled by her dishonesty and cronyism.”