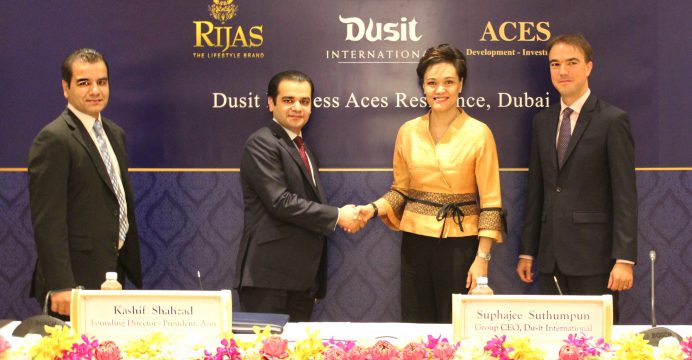 Dusit Hotels and Resorts announces the signing of a technical design agreement with ACES Property Development to bring a new hotel apartment project under the DusitPrincess brand to Dubai in the United Arab Emirates.

The agreement was formalised at a signing ceremony recently held at the Dusit Thani Bangkok presided over by executives from both companies, including Dusit’s Group Chief Executive Officer Ms Suphajee Suthumpun and Founding Director of ACES, Mr Kashif Shahzad.

The DusitPrincess ACES Dubai will be located in the Jumeirah Village Circle, in close proximity to the new Al Makhtoum International Airport, the Palm Jumeirah, and other exciting shopping and entertainment venues. Full details will be released at the project’s groundbreaking ceremony to be held soon.