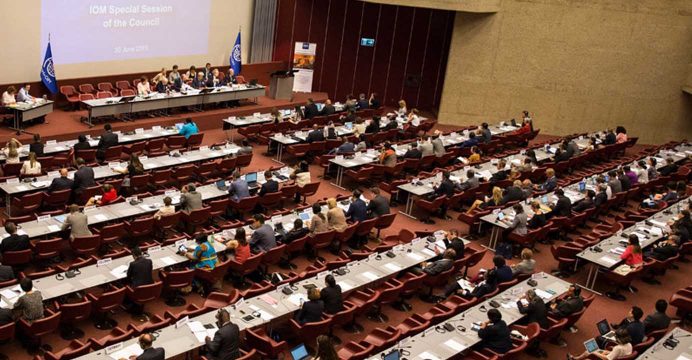 Member States of the International Organization for Migration (IOM), meeting at a Special Council in Geneva on 30th June, decided that IOM should join the United Nations system as a related organization.

IOM Director General William Swing will communicate the decision of IOM Member States to United Nations Secretary General Ban Ki-moon. It is expected to enter into force, upon signature of the agreement, on 19 September during a UN Summit on Migrants and Refugees, after being submitted to the UN General Assembly for approval.

“Today has been a watershed moment in the life of this Organization, which is celebrating its 65th year,” said IOM Director General William‎ Lacy Swing. “Member States approved the motion by which IOM will join the United Nations system.”

“We expect to soon have a seat and a voice at the UN table and the UN will soon have a dedicated migration agency,” he added.

“China is home to the world’s largest population of internal migrants and its people have for centuries been migrating abroad. Migrants and refugees are increasingly the focus of global debate and their enormous contribution to the societies they join should be celebrated. China‘s experience in particular in managing migration has a lot to offer. The global significance and universality of IOM will also be greatly enhanced by China’s membership,” he added.

UN Secretary General Ban Ki-moon also welcomed China’s decision to join IOM and said that it would make a valuable contribution. “China becoming a member of IOM is particularly important at this crucial time, when the issue of migrants and refugees needs more attention and action than ever before,” he said.

Sixty-five years ago in December 1951 IOM was founded out of the upheaval of World War II, when vast numbers of people were on the move to better their lives. IOM’s decision to join the UN system comes as more of the world’s people are on the move than ever before. One in every seven persons on the planet is now a migrant and 65 million of these are forced migrants and refugees.

The UN Summit on Refugees and Migrants in September this year comes at a time when global perceptions of migrants are increasingly negative. The summit will focus world attention on the fact that the challenges faced by migrants are not problems to be solved, but realities to be managed.

Migration governance and the protection of refugees are deeply embedded in the UN’s Sustainable Development Goals. Managed migration is a process of facilitating orderly, safe, regular and responsible migration through planned and well-managed migration policies.

Many millions of migrants leave home to find employment, education or to otherwise improve their lives. They are often responding to labour and skill shortages and make an essential contribution to the economies and societies of their destination countries.

Other migrants are forced to leave. Record-breaking numbers of migrants, many of them entitled to protection as refugees, are moving across international borders, fleeing conflict, persecution, poverty, climate change, natural disasters and environmental degradation.

IOM, which assisted an estimated 20 million migrants last year, is an intergovernmental organization with over 9,500 employees and 450 offices worldwide.