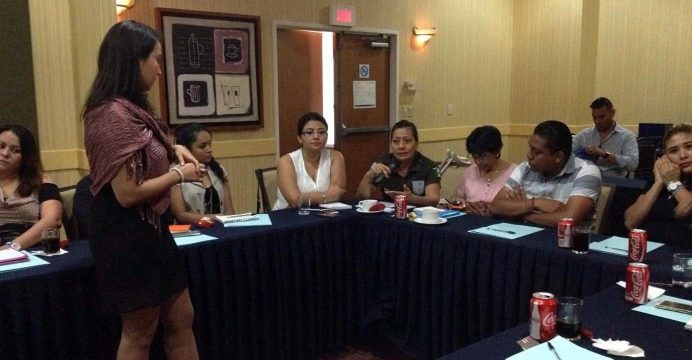 IOM organized workshop with officials on counter-trafficking in Mexico

IOM launched this week in Chiapas, southern Mexico, a series of workshops aimed at strengthening the counter-trafficking capacities of the Inter-Institutional Committee for Assistance to Trafficking Victims with judiciary officials, emphasizing a human rights and gender perspective.

These workshops are designed to meet the needs and challenges facing the justice sector in the field, contributing to the increase in convictions for human trafficking while improving protection and assistance to trafficking victims in Chiapas, a state that shares a border with Central America.

In 2007, IOM Mexico supported the creation of the Inter-Institutional Committee for Assistance to Trafficking Victims, led by the National Institute of Migration, in order to propose and coordinate joint actions of federal and municipal authorities and comprehensive care and protection for victims of trafficking. This committee is composed of government actors as Federal Police, counter-trafficking prosecutors, civil society actors like specialized shelters for victims, the State Human Rights Commission and international organizations like IOM, among others.

The series of training sessions for the judiciary will bring together about 115 officials from the sector, in three different locations, starting with the first workshop in Tapachula, Chiapas’ border city with Guatemala. On June 17, the second three-day workshop will start in San Cristobal de las Casas; the series will conclude in Tuxtla Gutierrez on June 24.

As a basis for the design and implementation of these sessions IOM assessed the training needs for Chiapas’ judiciary, tapping support from various local courts, including the Superior Court of the State of Chiapas, and the National Commission of Superior Courts of Justice of the United Mexican States (CONATRIB).

The workshops are part of two projects funded by the US State Department, the first aimed at strengthening the capacities of the Mexican government to prosecute cases of human trafficking and to improve systems to protect victims. The second is a regional project covering five Central American countries, sighted at strengthening capacities for the protection and assistance of vulnerable migrants in Mesoamerica. IOM implements both projects.