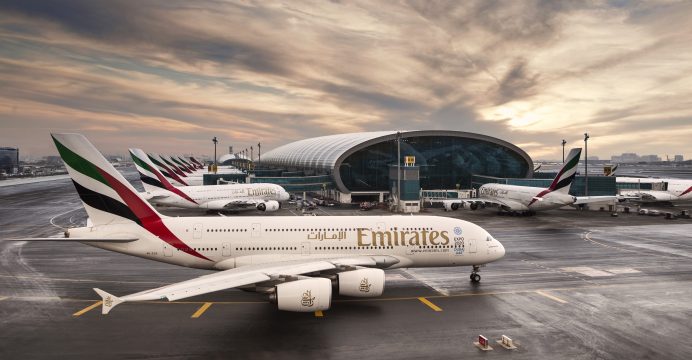 Emirates to Deploy Flagship A380 Aircraft on Moscow route

Emirates has announced that it will be upgrading one of the two daily flights servicing its Dubai-Moscow route to an A380-800, commencing 1st December 2016.

Since Emirates started flying from its Dubai hub to Moscow in 2003, the airline has carried almost 3.5 million passengers on the route. Over the past 12 months, demand has increased, with some 400,000 passengers having travelled on the route. The increased level of passenger support and demand has led to Emirates’ decision to bring its iconic A380 to the Russian capital, setting a new product quality level in the market.

From the beginning of December, on flight EK131/132, the three-class A380-800 will offer 14 Private Suites in First Class and 76 fully flat-bed mini-pods in Business Class on the upper deck. It will also provide Onboard Shower Spas for First Class passengers and the iconic Emirates Onboard Lounge, where First Class and Business Class passengers can socialise at 40,000 feet, both products being unique to the Russian market. An additional 426 seats in Economy, gives a total of 516 seats on the aircraft, increasing the number of seats on the route by 23%.

Operating a higher capacity aircraft helps serve the growing demand from both leisure and business travellers. Outbound from Moscow, Dubai, with its family-friendly attractions and soon-to-open new theme parks is always popular with Russian travellers, as are the Indian Ocean islands, Thailand and Bali. Upcoming and recently launched Emirates routes like Cebu, Yinchuan, Zhengzhou and Yangon  as well as Hanoi and the third daily flight to Cape Town are also expected to prove popular.  Inbound, the A380 supports both tourism and trade in the market, bringing in travellers from Far East, Africa and the Middle East to Russia and facilitating export through Emirates SkyCargo to countries worldwide on the Emirates network.

Moscow joins more than 40 Emirates A380 destination cities, offering Russian travellers the airline’s best-in-class onboard product and renowned service. Passengers in all cabins can enjoy Emirates’ award-winning inflight entertainment system, ice Digital Widescreen, which offers more than 2,500 channels of films, TV programmes, music and podcasts. Passengers travelling on the A380 can stay easily connected to family, friends and colleagues with free onboard Wi-Fi.

In March this year, Emirates and S7 Airlines, based at Domodedovo Airport announced an extended codeshare agreement on more than 30 Russian routes increasing connectivity and benefits for customers across Russia. The extended partnership also created a direct link under Emirates’ code between St. Petersburg and Moscow, allowing visitors to experience Russia’s two largest cities with a single travel itinerary.

All flight times are local.