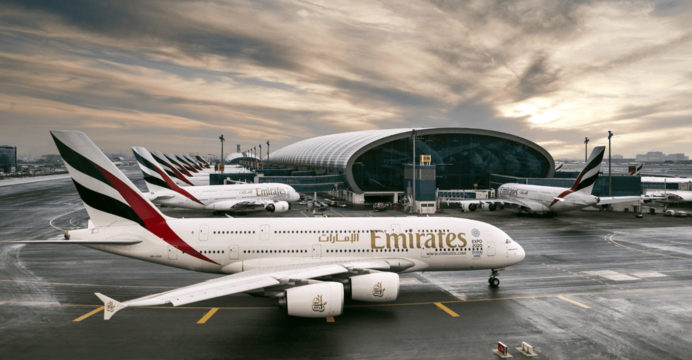 Emirates to temporarily suspend most passenger flights from March 25

Dubai carrier Emirates Airline announced on Sunday it will suspend most passenger flights from March 25 amid the novel coronavirus outbreak.

“Today we made the decision to temporarily suspend all passenger flights by 25 March 2020,” the airline said on Twitter. The United Arab Emirates announced on Friday the first two deaths from the COVID-19 disease in the country.

Cargo service and routes to 12 countries including the U.S., U.K., Switzerland and Singapore, will remain in operation, the company said.

The state-owned airline has turned Dubai into a hub for global travel that’s under assault by the coronavirus pandemic. Countries are closing off access to protect their populations, dealing a body blow to the industry. Carriers that were in relatively good health at the start of the year have had to ground fleets, lay off staff and turn to government aid for survival.

We will continue to watch the situation closely, and will reinstate our temporarily suspended passenger services, as soon as feasible. These are unprecedented times for the airline & travel industry, but we will get through it with your support. https://t.co/x7Y9XUOaAW 5/5 pic.twitter.com/Eh8QFBEY2Y

Major U.S. carriers like Delta Air Lines Inc. and American Airlines Inc. are waiting on lawmakers to clear a bailout package, while in London, where Heathrow airport the busiest hub in Europe, the government is considering moves to support the industry that include loans and potentially equity.

U.K. Airline Bailout in Flux With Range of Steps Under Review

Similar scenarios are playing out in Germany, France and Scandinavia, while China has already nationalized the parent of Hainan Airlines Holding Co.

The Emirates business model is built around an all-wide-body fleet off Airbus SE and Boeing Co. aircraft carrying passengers between all corners of the globe, and while the spread of the virus is easing in parts of Asia, it’s accelerating in Europe and North America.

The airline is based in Dubai International Airport, the world’s busiest airport in terms of international passengers, which has banned tourists and residence visa holders from entering the country.