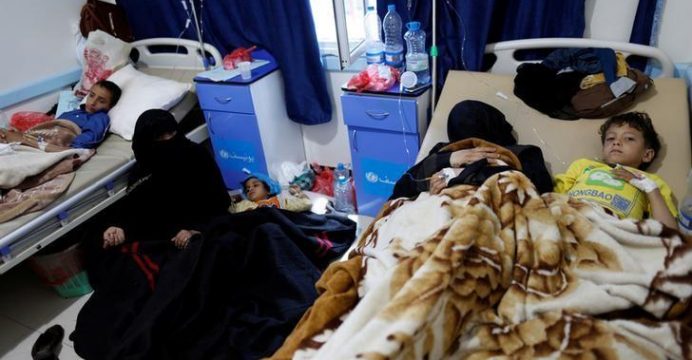 The humanitarian situation in Yemen is a “catastrophe”, and cholera cases could reach a million by the end of the year, the International Committee of the Red Cross said on Friday.

“The situation has really evolved in a very dramatic way and I think that it’s nothing short of a catastrophe,” Faite told a news briefing in Geneva.

Civil war in Yemen has killed more than 10,000 people since it began in March 2015. Control of the country is split between the Iran-aligned Houthis, who control much of northern Yemen, including the capital, Sanaa. Opposed to the Houthis are a Saudi-led coalition.

With the main port of Hodeidah damaged, the Red Cross brings medical aid, including insulin, into Yemen with occasional cargo planes to Sanaa. Other goods come by land convoys from Jordan and Oman and by ship from Jordan, Oman and Dubai.

A ship from Karachi with 500 metric tonnes of rice is now due on Oct 7 in Hodeidah, the first ICRC shipment there since early February.

Faite called on all sides to open Sanaa airport to commercial flights for essential aid supplies and to make progress toward allowing the Red Cross to visit prisoners of war.

“I don’t think political settlement is coming soon and I‘m very worried that the extension of the conflict would lead to more problems,” Faite said.

“This is why humanitarian aid, access of essential goods should be there,” he said. “There is a bottleneck”.

Although the death rate for cholera victims has dropped to less than 0.3 percent, Faite said Yemen’s “health sector is really on its knees in Yemen … the health staff is on its knees as well because they are not paid.”

For the first time, the Red Cross is now providing health workers with food parcels, he said.