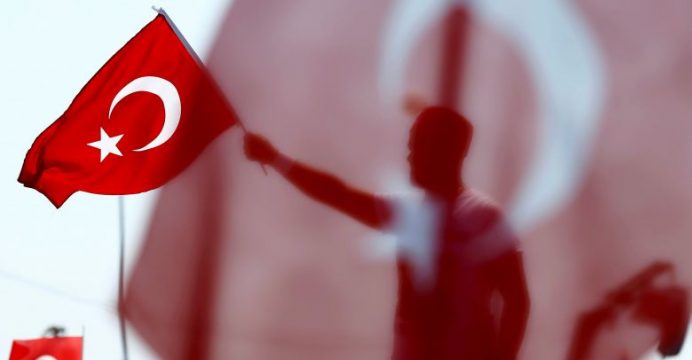 A Turkish prosecutor on Tuesday ordered the detention of 125 police officers in the investigation of a religious movement the government blames for an unsuccessful military coup, the state-run Anadolu Agency reported. It was the second wave of arrests since Oct. 7 to target suspected coup plotters in the police force.

The ruling AK Party, founded by Erdogan, will not harbor members of the Gulen network that Ankara lists as a terrorist organization, Prime Minister Binali Yildirim said in parliament.

“AK Party will not shelter any traitor or terrorist,” he said. “We are engaged in the same struggle (against Gulen’s network) within the AK Party as we are in Turkey, generally.”

No high-ranking AKP members have faced charges in the post-coup crackdown, which has included the arrests of 32,000 people and purge of some 100,000 military officers, police, teachers, judges, prosecutors and others from state jobs.

Parliament on Tuesday will vote to extend the state of emergency, introduced in July for three months, until January.

The vote is a formality as the AKP commands a large majority of parliamentary seats and the nationalist opposition has already pledged to back the move.

Yildirim acknowledged that a small number of mistakes might occur during the crackdown but said the government will not allow “unjust treatment” of citizens.

In Tuesday’s operation, authorities conducted raids in Istanbul, and among the police officers being sought were 30 deputy police chiefs, Anadolu said. No one was immediately available at the prosecutor’s office to comment on the warrants.

The state intelligence agency identified at least 56,000 operatives after it cracked ByLock, which Gulen’s followers began using in 2014, officials said in August.

Gulen, 75, has led a decades-old religious movement whose members sought jobs in the security forces and civil service to expand his clout, authorities say. He fled Turkey in 1999 to avoid trial on suspicion of anti-secular comments.

Gulen’s conservative network supported Erdogan, who has roots in an Islamist political movement, during the first half of his rule but the two men fell out over disagreements in foreign and domestic policy and revelations about a corruption investigation that targeted Erdogan’s inner circle.