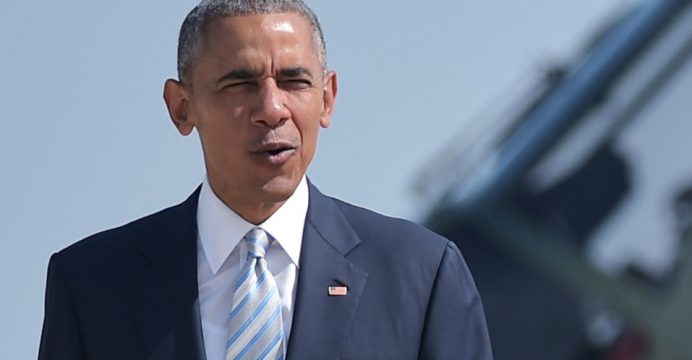 President Barack Obama goes off the beaten track on Thursday — way off — to a marine reserve in the middle of the Pacific Ocean, reports BSS.

Obama will take Air Force One three hours west from his native Honolulu, to Midway Atoll on the far northwestern tip of the Hawaiian island chain. Until recently, the area was perhaps best known to military history buffs.

Seventy-four years ago, the Battle of Midway was a decisive naval fight in World War II that turned the tide of the war against Japan. More recently, Midway has become a cause celebre for conservationists.

The atoll is situated at the heart of Papahanaumokuakea, a vast Pacific marine reserve. Around 40 people live and work on Midway, mostly US Fish and Wildlife Service staff.

US President Barack Obama boards Air Force One to depart for Hawaii, on his way to tour Midway Atoll and attend summits in Laos and China, from Reno-Tahoe International Airport in Reno, Nevada, US

But the shores and waters are home to more than 7,000 species, including black coral, which can live for 4,500 years.

In 2006, President George W. Bush gave the area protected status, creating what was then the world’s largest marine reserve.

That foreshadowed something of a trend, according to the Pew Charitable Trusts, which lobbies for the establishment of more protected maritime areas.

Since Bush’s decision “more than a dozen large-scale highly protected marine reserves have been created around the globe, including nine larger than the original Hawaiian monument,” the foundation said.

Obama recently announced his decision to quadruple the size of Papahanaumokuakea and make it the world’s largest marine reserve again.

“This is an area twice the since of Texas, that’s going to be protected and allows us to save and study the fragile ecosystem threatened by climate change,” he said.

“Teddy Roosevelt gets the credit for starting the national park system, but when you include a big chunk of the Pacific Ocean, we now have actually done more acreage.”

Obama will begin his half-day visit by meeting the humans of the US Fish and Wildlife Service. He will then tour the island and give a statement to imported reporters on Turtle Beach.

The White House has coyly stated that Obama may “interact directly with the wildlife,” likely code for trading his business suit for a wet suit and jumping in the water.

“Ancient islanders believe it contained a boundary between this life and the next,” Obama said of the atoll. “Hundreds of brave Americans gave their lives there in defense of the world’s freedom.”

For the outgoing president, the visit is part of an eight-year effort to put the environment and tackling climate change higher on the political agenda.

After a brief stop back in Hawaii, Obama is expected to announce the joint formal joining of that accord with President Xi Jinping during a visit to China.